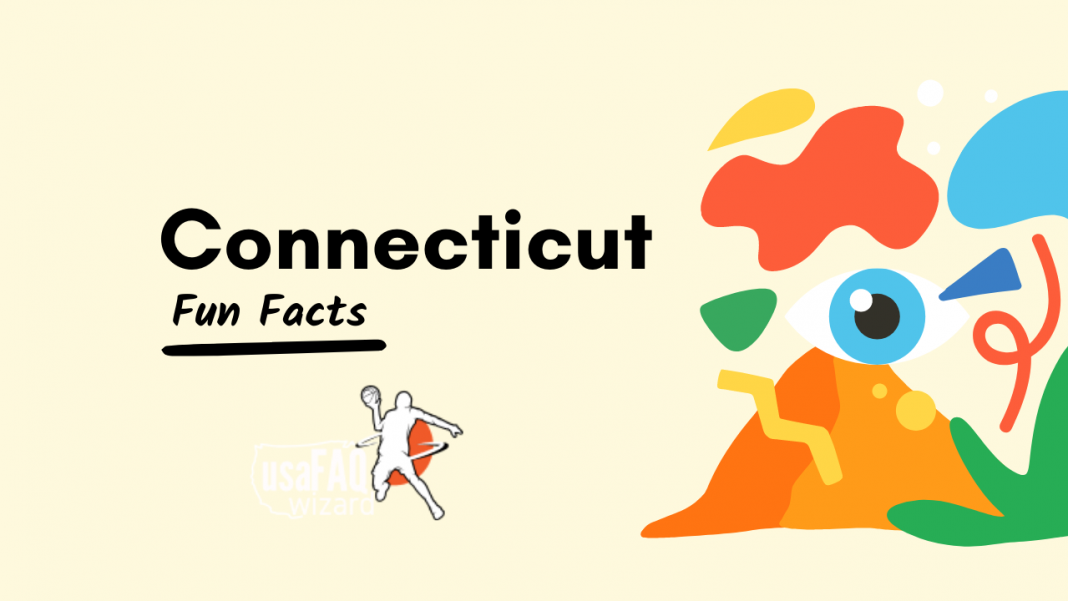 We bring to you 50 interesting fun facts about Connecticut in this quick post.

The state of Connecticut is a part of the United States of America. It is one of the six New England states and one of the original 13 states.

Connecticut State is in the northeastern part of the United States. One of the interesting fun facts about Connecticut is that in terms of overall land, it is the 48th largest of the 50 US states, but it is one of the most densely populated.

More than 10,000 years ago, the first people arrived in what is now Connecticut. Native American tribes such as the Mohegan, Pequot, and Niantic resided in this area several thousand years later.

In 1614, Dutch traders arrived, and in 1633, Connecticut’s first European settlement was established.

In the early 1630s, both Dutch and English settlers established settlements in Connecticut, which soon became a British colony. The colonists grew more dissatisfied with British control over time.

This sparked the American Revolution, which lasted until 1783, when the colonies were granted official independence from British sovereignty.

Another fun facts about Connecticut are that Hartford is the insurance center of the United States and home to the oldest U.S. newspaper still in print, the Hartford Courant, which was founded in 1764.

1. The first telephone book ever issued contained only fifty names. The New Haven District Telephone Company published it in New Haven in February 1878.

2. The USS Nautilus – the world’s first nuclear-powered submarine was built in Groton in 1954.

4. In 1705, copper was discovered in Simsbury. Later, the copper mine became the infamous New-Gate Prison of the Revolutionary War. Doctor Samuel Higley of Simsbury started the first copper coinage in America in 1737.

5. The Scoville Memorial Library is the United States oldest public library. The library collection began in 1771, when Richard Smith, owner of a local blast furnace, used community contributions to buy 200 books in London. Patrons could borrow and return books on the third Monday of every third month. Fees were collected for damages, the most common being “greasing” by wax dripped from the candles by which the patrons read. – Fast facts about Connecticut

6. On April 9, 1810, a Salisbury town meeting voted to authorize the “selectmen draw upon the town treasurer for the sum of one hundred dollars” to purchase more books for the Scoville Memorial Library collection, making the library the first publicly supported free town library in the United States.

7. Mary Kies, of South Killingly was the first woman to receive a U.S. patent. On May 15th, 1809 for a method of weaving straw with silk.

10. Cattle branding in the United States began in Connecticut when farmers were required by law to mark all of their pigs.

11. In Hartford, you may not, under any circumstances, cross the street walking on your hands!

12. Connecticut is home to the oldest U.S. newspaper still being published: The Hartford Courant, established in 1764.

13. Connecticut has approx. 144 newspapers published in the State (daily, Sunday, weekly and monthly).

16. The first lollipop-making machine opened for business in New Haven in 1908. George Smith named the treat after a popular racehorse. – Fast facts about Connecticut

18. In 1937, Connecticut became the first state to issue permanent license plates for cars.

19. The World Wrestling Federation or the WWF is headquartered in Stamford.

20. Bristol, CT is considered the “Mum City” of the USA because of the many Chrysanthemums grown and sold to various states and Canada

22. Danbury, An important military depot for the American Revolutionary armies was burned and looted in April 1777 by the British under Major General William Tryon.

23. The first blast furnace in Connecticut was built in Lakeville in 1762.

24. The Submarine Force Museum in Groton is home of the historic ship Nautilus (SSN 571). It is the official submarine museum of the United States Navy.

28. In colonial New Haven cut pumpkins were used as guides for haircuts to ensure a round uniform style. Because of this fashion, these New Englanders were nicknamed “pumpkin-heads.”

30. The first human inhabitants of present-day Burlington were members of the Tunxis Tribe, who belonged to a confederation of Algonquian Indians. Legend holds they used the area as a hunting ground.

31. The first English settlers of Connecticut arrived in 1636, settling the plantations of Windsor, Hartford and Wethersfield.

32. The Monroe Town seal is in the form of a circle with the words “Town of Monroe Connecticut” written in the outer rim of the seal. Inside this outer circle is a profile of a bust of James Monroe, who was the fifth President of the United States, serving from 1817-1825. – Fast facts about Connecticut

33. Originally, Montville, along with Groton and Waterford, was a part of New London. New London was settled in 1646 under the name of Pequot, so called after the Pequot Indians, the name changing to New London in 1658.

34. B.F. Clyde’s Cider Mill is the only steam-powered Cider Mill in the United States and is located in Mystic.

36. New Milford’s worst disaster struck in 1902 when the main business section centered on Bank Street was almost completely leveled by the “Great Fire”.

37. Named in 1724 for the stony character of the hilly countryside, North Stonington was incorporated in 1807. – Fast facts about Connecticut

38. To register to vote in Connecticut you must:

Be a resident of a Connecticut Town;

Not be convicted of a felony

39. The manufacturing of the first safety fuse started in Simsbury in 1836.

40. In 1728, the first steel mill operating in America was located in Simsbury.

41. Wallingford has earned a worldwide reputation for the production of silverware.

42. The first expert in the treatment of Asiatic cholera was Dr. Henry Bronson in 1832. He was a professor at Yale Medical School.

43. The first golf tournament in Connecticut for women only was held in Waterbury on June 12, 1917. – Fast facts about Connecticut

44. West Hartford is the birthplace of Noah Webster, the author of the first dictionary published in 1807.

45. Although West Haven is Connecticut’s youngest city, being incorporated in 1972, it is a community that dates back over 360 years, making it one of the oldest settlements in the country.

47. Thomas Sanford made the first friction matches in Beacon Falls in 1834.

48. Some of the world’s most famous cloth is woven in the Stafford textile mills.

49. The town of Washington was incorporated in 1779, being named in honor of General George Washington.

50. Hartford has remained the capital city of Connecticut since 1875.

Summary of Facts About Connecticut

Thanks for checking out these quick Connecticut facts. Isn’t it fun to know that Cattle branding in the United State began in Connecticut as farmers were required by law to mark all their pigs?