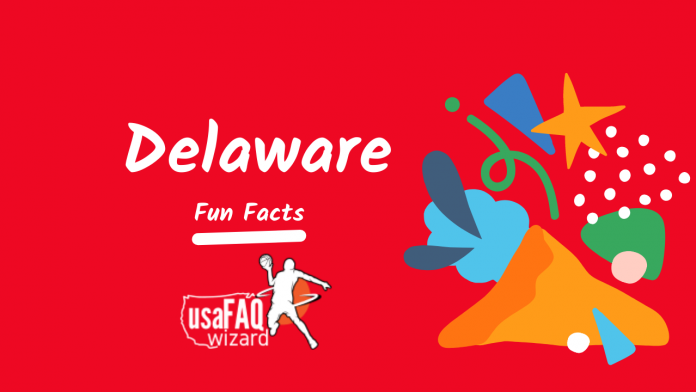 In this quick post, we present 50 interesting and fun facts about Delaware State.

Delaware was discovered in 1609 by Henry Hudson, who was sailing under the Dutch flag.

Delaware State is one of the fifty US states and it occupies a modest niche in the Boston–Washington, D.C. urban corridor along the Middle Atlantic seaboard as the first of the original 13 states to ratify the American Constitution.

It is one of the most densely inhabited states in the United States, ranking 49th in total area among the 50 states. From north to south, the state is divided into three counties: New Castle, Kent, and Sussex, all founded in 1682.

Delaware has long had strong historical, geographical, and economic ties to Pennsylvania, particularly the city of Philadelphia, which is served by the Delaware River and other major transit corridors.

The stability and conservatism that historically defined Delaware, particularly in the southern areas bordering Maryland’s Eastern Shore, had a lengthy hold on political life much out of proportion to their supporters’ numbers.

One of the interesting fun facts about Delaware is that it has been dubbed the United States’ chemical capital, corporate capital, and credit-card capital over the years.

Delaware also produces a wide range of fruits and vegetables and was a forerunner in the food-canning sector in the United States. Important crops include corn, soybeans, potatoes, and hay.

Broiler chicken farms in Delaware feed the major Eastern markets, and fishing and dairy products are other key sectors in the state.

Another of the interesting facts about Delaware is that many American and foreign corporations have chosen Delaware as their nominal home because of its liberal incorporation statutes and a Court of Chancery that specializes in the most intricate issues of corporate governance and finance.

In and near Wilmington, the Fort Christina Monument, Hagley Museum, Holy Trinity Church (erected in 1698, the oldest Protestant church in the United States still in use), and Winterthur Museum; central New Castle, a nearly unchanged late-eighteenth-century capital; and the Delaware Museum of Natural History are all worth visiting.

Before you dive deep into other interesting facts about Delaware, you should know that Ruth Ann Minner was elected as Delaware’s first female governor in 2000.

1. Delaware was the first state to ratify the United States constitution. It did so on December 7, 1787.

2. Delaware shares a semi-circular border with Pennsylvania. The border was drawn at the time of the original land grants to William Penn from King Charles II and the Duke of York.

4. The United States battleship Delaware was commissioned in 1910. – Delware facts

5. Delaware is the only state without any National Park System units such as national parks, seashores, historic sites, battlefields, memorials, and monuments.

6. Delmar is popularized as a little town too big for one state. The community has the distinction of being located partly in Delaware and partly in Maryland.

7. The most historic site in Frederica is Barratt’s Chapel east of town. The chapel is where the Methodist Church of America was organized in 1784.

8. Today about 500 descendants of the original Nanticoke Indians reside in Delaware. They celebrate their heritage each September with the Nanticoke Indian Pow Wow. – fun facts about Delaware

9. The log cabin originated in Finland. Finnish settlers arrived in Delaware in the mid-1600s and brought with them plans for the log cabin, one of the enduring symbols of the American pioneer. One of the cabins has been preserved and is on display at the Delaware Agricultural Museum in Dover.

10. John Dickinson was called the Penman of the Revolution for his writings on independence. His boyhood home is preserved in Dover.

11. Tradition holds the first time Betsy Ross’s famous flag was flown was at the Battle of Cooch’s Bridge. This historic site is located on route 4 in Newark.

12. The Blue Hen chicken is the official state bird. The hens were noted for their fighting ability. Delaware is sometimes referred to as the Blue Hen State. – Interesting fun facts about Delaware

14. Eleven years after the landing of the English pilgrims the first white settlement was made on Delaware soil.

15. In 1785 Oliver Evans of Newport invented the automatic flour milling machinery that revolutionized the industry.

16. “Our Delaware” is the official state song. The words are by George Hynson, music by William Brown.

18. Ebright Road in New Castle County is the highest state elevation at 442 feet above sea level. The lowest elevation is along the coast at sea level. – fun facts about Delaware

19. Thomas Garret lost his entire fortune in his battle against slavery. He was sued by a Maryland slave owner and fined for aiding a black family in flight. Over his lifetime, Garrett reportedly helped more than 2,000 fugitive slaves move through Delaware, an important stop on the Underground Railroad.

20. Rehoboth Beach is the state’s largest coastal resort town. Methodists who purchase the land for a summer camp and meeting place originally constructed it. – fun facts about Delaware

22. Twelve concrete observation towers along the coast were constructed during World War II to protect the state’s coastal towns from German u-boat attacks.

23. Fisher’s popcorn is famous coastal caramel corn. It has been ordered from as far away as Vietnam and Indonesia.

24. The American holly is the official state tree. The tree can reach a maximum of 60 feet in height and a trunk diameter of 20 inches.

25. The peach blossom is Delaware’s official state flower and has prompted Delaware’s nickname as the peach state.

26. New Sweden was founded as a colony in 1638 and is recognized as the first permanent colony on Delaware soil. – fun facts about Delaware

29. The state’s Coastal Heritage Greenway consists of a corridor of open space running along 90 miles of coast and spanning the area between Fox Point State Park and the state line at Fenwick Island.

30. Thousand Acre Marsh is the largest freshwater tidal wetland in northern Delaware. The Chesapeake and Delaware Canals border the marsh.

32. Augustine Beach was named for Augustine Hermann. He was a Bohemian adventurer who mapped the Delmarva Peninsula and surrounding areas in the mid-1600s.

33. Odessa possesses one of the finest collections of late 18th- and early 19th-century architecture in the middle Atlantic region. The center of town is on the National Register of Historic Places and the entire town has been zoned as historic. – fun facts about Delaware

34. Barratt’s Chapel is known as the Cradle of Methodism. It was built in 1780 and is the oldest surviving church built by and for Methodists in the United States.

35. The 80-food Great Dune is the state’s highest. It is located at Cape Henlopen State Park in Lewes.

36. The Maryland/Delaware boundary and the Mason-Dixon Line divide Delmar. A double crown stone marker was erected in 1768 as the southern end of the only North-South portion of the Mason-Dixon line.

37. Horseshoe crabs may be viewed in large numbers up and down the Delaware shore in May. The crabs endure extremes of temperature and salinity. They can also go for a year without eating and have remained basically the same since the days of the dinosaur.

38. The Du Pont Laboratories first produced nylon at its plant in Seaford. This earned the town the distinction of being the Nylon Capital of the World.

39. In recognition of sportfishing’s overall recreational and economic contributions to the state of Delaware and of the specific values of the weakfish (Cynoscion genus) as a game and food fish, the state Legislature adopted the weakfish as Delaware’s State fish in 1981. This fish is also known as sea trout, gray trout, yellow mouth, yellow fin trout, squeteague, and tide runner. – fun facts about Delaware

41. Delaware was named for Lord de la Warr. He was the first governor of Virginia.

42. The sheaf of wheat, ear of corn, and the ox on the state seal symbolize the farming activities of early Delaware.

Related: List of all US State flags and their symbols

43. The Delaware Indians were one of the most advanced tribes in the eastern United States.

46. America’s newest tall ship is ten stories high and 139 feet long. The recreation is the Kalmar Nyckel that landed on the Christina River in 1638. – fun facts about Delaware

47. Quaker merchant Thomas Garret is thought to be the model for a Quaker farmer in the novel, “Uncle Tom’s Cabin.” Garret and famed abolitionist Harriett Tubman worked closely with Delaware’s anti-slavery forces.

48. The frying pan built-in 1950 for use at the Delmarva Chicken Festival is 10 feet in diameter and holds 180 gallons of oil and 800 chicken quarters.

49. The Delaware Breakwater at Cape Henlopen State Park was the first structure of its kind in the western hemisphere.

50. The town of Milton was named after the English poet John Milton in 1807.

Summary of Facts About Delaware

Thanks for checking these Delaware facts. Isn’t it amazing to know that Delaware was the first state to ratify the United States constitution? It did so on December 7, 1787.

Tell us what you think about these facts, and don’t forget to like, share, and drop your comments.