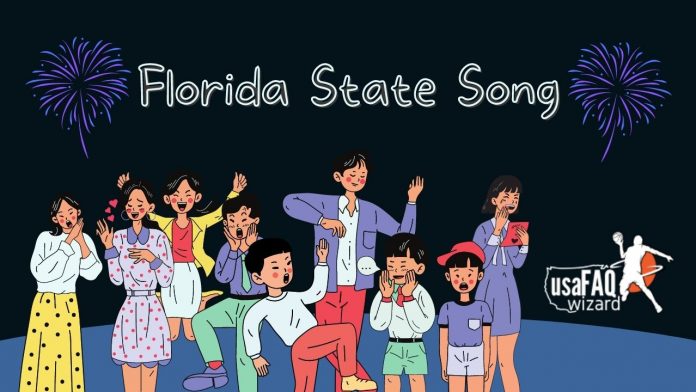 What is the official Florida State Song? It is called “The Swanee River (Old Folks at Home)” and was written in 1851 by Stephen C. Foster.

Located in the southeastern United States, Florida is the southernmost of the 48 contiguous states, with its northernmost point around 100 miles (160 kilometers) south of California’s southern border.

The warmth and scenery of the “Sunshine State” have traditionally drew a considerable number of visitors to the state. As the state’s principal source of revenue, tourism has surpassed agriculture and manufacturing in importance, and the prospect of employment in the state’s rapidly developing service sector has drawn a considerable number of immigrants, particularly from Latin America and the Caribbean.

Therefore, Florida has continuously ranked among the states that have experienced the fastest rise in immigrant populations. You can read more fun facts about Florida State.

All de world am sad and dreary,
Eb-rywhere I roam;
Oh, darkeys, how my heart grows weary,
Far from de old folks at home!

All round de little farm I wandered
When I was young,
Den many happy days I squandered,
Many de songs I sung.
When I was playing wid my brudder
Happy was I;
Oh, take me to my kind old mudder!
Dere let me live and die.

One little hut among de bushes,
One dat I love
Still sadly to my memory rushes,
No matter where I rove.
When will I see de bees a-humming
All round de comb?
When will I hear de banjo strumming,
Down in my good old home?

Foster, who wrote around 200 songs throughout his productive career, is commemorated with a memorial site in White Springs.

In Florida, the Suwannee River flows southerly from its source in Georgia to the Gulf of Mexico, dividing the state’s panhandle by a ridge of land that separates it from the rest of the state.

Foster sold his novel “The Swanee River” to noted minstrel E. P. Christy in 1851, a year after completing it.

How did the Florida State Song name come about? Stephen C. Foster is said to have picked the “Swanee” because its two-syllable cadence fit well with the music he was composing at the time.

Foster had never visited Florida, thus it’s unlikely that his decision was influenced by his familiarity with the river’s Florida part.

S. P. Robineau of Miami, through House Concurrent Resolution No. 22 in 1935, was successful in having “The Swanee River” declared the official state song of Florida, replacing “Florida, My Florida,” which had been approved as the state song in 1913 by the legislature.

It wasn’t until 1935 that Foster was able to claim his true place as a writer and composer.