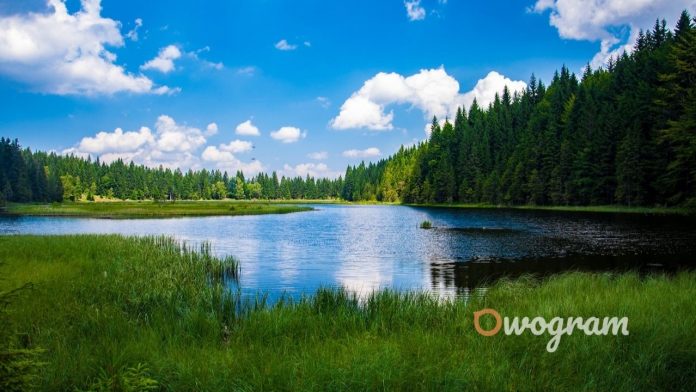 We bring to you a quick collection of the top 10 biggest lakes in the US.

According to Smithsonian magazine, there are 117 million lakes in the world today and still counting.

Currently, there are over 90 big lakes in the US (whoever said about 71% of the earth is water was right, as I can imagine this figure is exclusive to lakes and not other identified water bodies).

Well, today’s focus is on the biggest lakes in the US, but before we go into the ceremonial act of awarding these lakes, how about a little class?

We have written about the top 10 largest cities in the United States, you should check it out.

So What Is a Lake?

It has been said that there is no distinct definition of a lake but a descriptive one. One of which is coined from Wikipedia defines a lake as: “an area filled with water, localized in a basin, surrounded by land, and set apart from any river that serves to feed or drain the lake”.

Let’s get a little physical, shall we? We have a big bucket of water and an empty bowl (please ignore the size as long as it has some depth)… Please pay attention now.

Let’s scoop some water into the empty bowl from the big basin. Now before all these get muddled up let me break it down.

At this stage, we have a bowl filled with water, with the water-limited to that bowl, and separated from the big bucket of water that fed it water in the first place.

While this simple illustration does not reveal the biggest lakes in the US, I hope it makes you understand what a lake is without stress.

How about repeating the above illustration with a bigger bowl? By now you should have two bowls filled with water (permit me to call them “lakes”).

There is no point in calling an expert to tell you which is bigger, as it is pretty obvious.

What am I saying? The lakes on this list did not exist based on which was discovered first, but rather, based on some factors like volume (definitely, since we are dealing with water) and more.

Without forfeiting the purpose of this post in the first place, I present to you the top 10 biggest lakes in the US:

Top 10 Biggest Lakes In the US

Whew! Who would have thought that the lake you love so much wouldn’t be on the list?

Permit me to rant a little about the top 10 biggest lakes in the US, pretty please.

This lake runs through Ontario and Canada from the north; Minnesota from the west, Wisconsin, and the Upper Peninsula of Michigan, one of the 50 US states, from the south.

Lake Huron is one of the members of the great lake family. It was named by the French after the people inhabiting the surrounding area of this lake.

It is made up of the easterly portion of Lake Michigan–Huron, which has the same surface elevation as its westerly counterpart and is connected by the 5-mile-wide, 20-fathom-deep Mackinac Straits.

Next on the list of the biggest lakes in the US is Lake Michigan.

Lake Michigan is the second largest of the great lake family, having a volume of 4,900 km3. It also ranks as the third-largest, with a surface area of 58,030 km2.

There are numerous islands in the lake, including the Beaver Island archipelago and the North and South Manitou Islands, which are located between the Upper and Lower peninsulas.

The western Great Lakes region of Michigan has a distinct climate that makes it ideal for growing a diverse range of agricultural products.

Many products, such as blueberries, cherries, asparagus, and grapes for juice and wine, are grown in abundance in the state. As a result, a wide range of orchards and vineyards have flourished along Lake Michigan’s shores.

Lake Erie is not only one of the biggest lakes in the US and part of the great lake family, it is also the 11th largest lake in the globe but, ironically, the smallest volume (480 km3) lake in its originating family.

The main outflow of this lake passes through Niagara River (a source of hydroelectric power to Canada and the United States).

One of the interesting things to know about Lake Erie is the naval battle that took place between the United States and the British during the War of 1812.

After the battle, the British were forced to give up control of Detroit, Lake Erie, and the territorial northwest.

Lake Ontario gets its inflow from the Niagara River and has a water volume of 1640 km3. According to the Hurons, Ontario means “great lake”.

This lake is the outlet to the Atlantic Ocean and is the “only great lake” that does not border the state of Michigan.

What is the most well-known feature of Lake Ontario? The climate around Lake Ontario is ideal for fruit trees, and the region has become a major producer of apples, cherries, peaches, pears, and plums. Lake Ontario attracts a variety of migrating birds due to its position.

Pollution from industrial and agricultural waste has wreaked havoc on Lake Ontario. The lake was disappearing by the 1960s and 1970s. Environmental concerns have required a clean-up of these wastes since then, which has been accomplished through improved treatment plants and stricter environmental restrictions.

Today, Lake Ontario has regained much of its former glory.

Related: Top 10 Richest States In USA and their GDPs

According to Wikipedia, the Great Salt Lake is one of the biggest lakes in the US and the largest saltwater lake in the western hemisphere. It is also ranked as the 8th largest terminal lake in the world.

The Great Salt Lake is home to various islands, causeways, a railroad, three state parks, and the Spiral Jetty, an earthwork monument. Hiking, sailing, and swimming are all available at the lake, which is a popular recreational location.

However, as water levels rise and fall, the size fluctuates. Because the lake is only 14 feet (4 meters) deep on average, a foot of water loss can significantly alter its overall size.

According to Utah State University’s Great Salt Lake Information System, the Bear, Weber, and Jordan rivers all feed into the lake. These rivers deliver fresh water from the Wasatch Mountains’ melted snow into the lake’s eastern region.

These rivers provide 66% of the fresh water that enters the lake. Rainfall, groundwater, and springs provide additional fresh water, according to the Great Salt Lake Ecosystem Program.

7. Lake of the Woods

The lake’s shoreline is believed to be 25,000 miles (40,000 kilometers) long, with over 14,000 islands. The Rainy River feeds the lake from the southeast, and it drains northwestward into Lake Winnipeg through the Winnipeg River.

Swimming, waterskiing, tubing, sailing, pontooning, canoeing, kayaking, and paddle boarding are just a few of the water sports available at Lake of the Woods.

Non-boat owners can rent fishing boats with engines, canoes, and kayaks at the resort, ensuring that everyone has access to the water.

Related: Top 10 Most Beautiful Beaches in the World

Lake OAHE is the 4th largest reservoir in the US by volume. It was named after the Oahe Indian mission in the year 1874.

When talking about the fun facts about Florida, you’ll most likely have something to say about Lake Okeechobee.

According to Hutchinson, there are 11 major types of lakes. They are:

If you take a shovel and make a shallow hole in the ground and fortunately the rain falls, while water flows on the ground it pools in that hole and goes nowhere but should rainfall cease for days and persistent sunlight is presence; that pool of water dries up leaving a marsh and then or a crusted flaking earth top.

Here are some other lakes that make the list of the top 20 biggest lakes in the US:

A Summary of the Biggest Lakes In the US

One could mistake a lake for another water pool, but here is an explanation to clear the air.

A lake is not part of an ocean; rather, it is located on the land, not in the rocks but on the land.

A lake is larger and deeper than a pond, although the dictionary defines a pond as an artificial lake. A lake is said to have probable wave action on the shoreline, whereas a pond cannot.

A lake is distinct from a lagoon, which has flowing water, unlike the former, which is stagnant. A lake is fed or drained by rivers and streams, while a lagoon is a coastal part of an ocean.

So, irrespective of its presence or absence on the list of biggest lakes in the US, lakes are different from streams, rivers, ponds, oceans, lagoons.

UsaFAQwizardhttps://usafaqwizard.com
This is UsaFAQwizard.com - a travel and education blog dedicated to providing you with educative travel guides, tips, and information about places like the US states, maps, countries of the world, colleges, and more.
RELATED ARTICLES
Travel

12 Awesome Ideas to Prepare Before Traveling With Kids

Top 10 Cheapest Places to Live in the United States 2022

Everything to Know When Moving to Spain