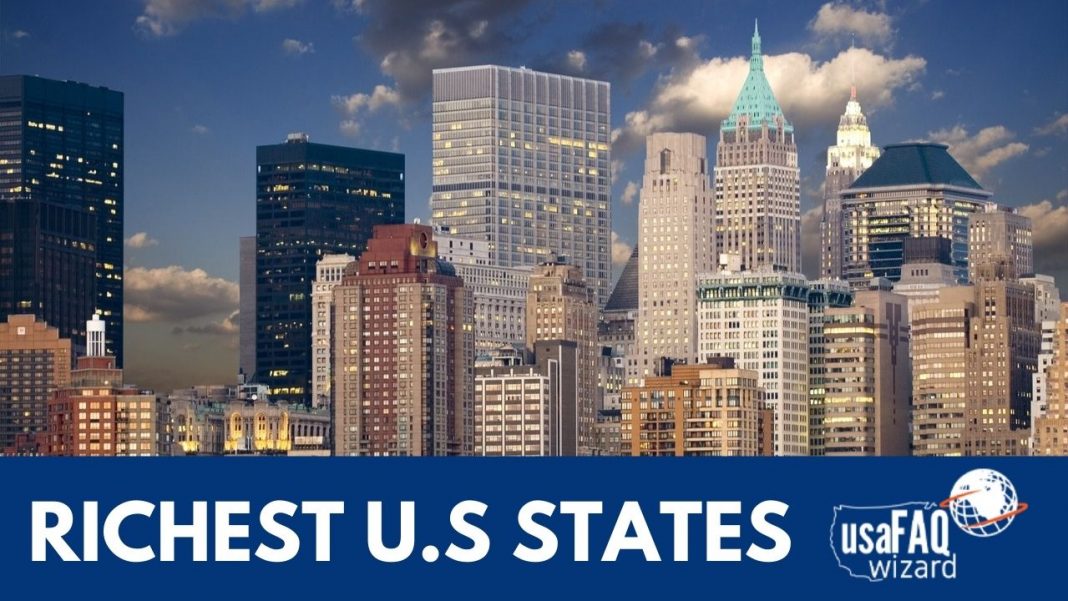 Hey, ever wanted to see the full list of the richest states in USA? We bring to you the top 10 richest U.S states as of 2022.

With a whopping GDP of $22,790 billion and a GDP per capita of $62,200, the United States consistently ranks as one of the wealthiest economies on the globe.

That being said, the USA is also one of the most politically, geographically, and economically diverse nations on the planet.

The great country, composed of 50 states list — each with its own distinct economy, from the agriculture and livestock rearing economies of the lower midwest, to the oil and gas dominated economies of the South — wealth is anything but equally distributed among states.

If you are on a mission to achieve the American Dream, knowing the richest states in USA is essential.

Here, we provide a rundown of the 10 richest states in America 2022. We used average annual income figures from the World Population Review to compile our list.

Washington State (not to be confused with Washington D.C) is one of the richest states in USA. It is the northernmost state on the west coast of the USA, bordering Canada.

Washington is not only the tenth richest state in the USA in 2022, it is the home and playground of some of the world’s most famous billionaires.

While Washington is perhaps best known for headquartering some of the nation’s top software and engineering giants, including Microsoft, Amazon, and aviation manufacturer Boeing, it is also the greenest state in the USA, making it one of the top lumber producers in the USA.

With both a rich tech and natural resource industry, Washington is a magnet for young and innovative talent. The state has an average annual income of around $98,983 according to the World Population Review.

Washington ranks even higher for state GDP, amassing a whopping $632,013 million per year. Economic well-being in Washington is relatively high, with only 6% living in extreme poverty and a mere 0.1% of jobs being low-wage.

The Washington suburbs, like the sleepy suburb of Medina, house the 100 million dollar homes of several of the world’s 1% including the homes of Microsoft founder Bill Gates and Amazon founder Jeff Besos. Overall, the state has a very low home foreclosure rate of only 0.45%.

New Hampshire is the fifth smallest state in the country. But what this quaint New England state lacks in size, it certainly makes up for in wealth, as the ninth on the list of the richest states in USA in 2022

This is a one-off achievement for New Hampshire. Surprisingly, this small and assuming state has been ranked rather consistently as one of the wealthiest states in the USA.

The average annual income in New Hampshire is $99,165, and due to the state’s controversial tax laws which include little to no income tax, residents get to enjoy every last penny of the fruit of their labors.

The state also has one of the lowest poverty rates in the country, with only 5% of the population living in extreme poverty and a home foreclosure rate of only 5.7%.

That being said, the state’s overall GDP of 86,319 million is quite small compared to other rich states, and around 18.3% of jobs are low-wage.

Nonetheless, the abundance of scenic lakes and serene woodlands in New Hampshire has made the state a popular ‘bedroom community” and “recluse” for the wealthy who work in nearby cities like Boston, many of whom have homes in New Hampshire.

The next one on the list of the top 10 richest states in USA in 2022 is Virginia. It has historically been wealthy. Before the Civil War, it was one of the wealthiest states in the South.

Virginia’s modern-day economy is driven by a growing number of technology companies, a large ship manufacturing industry, and a long-standing tobacco farming industry, just to name a few.

The state GDP is $557,986 million, and only 6% of the population live below the extreme poverty line.

Government and federal agencies provide a large number of higher-end jobs, while the average annual income is $101,746.

On top of that, the government attracts a diverse mix of talent from lobbyists and government contractors to politicians and nonprofit founders, all of whom play a key role in driving Virginia’s prosperous economy.

New York state is famous for a lot of things, but perhaps most notoriously for harboring New York City, one of the most expensive cities in the world where many a dreamer has gone into debt.

The state of New York, however, is also one of the richest states in USA in 2022, with a state GDP of $1,705,127 million, the third-largest in the country, and New York City is also where young bankers can make it big on Wall Street.

In addition to being a global center for finance, New York is also a mega-hub for technology, real estate, health care, and insurance. The average annual income in New York state is $101,945.

Even more, New York City attracts some of the wealthiest investors, philanthropists, and entrepreneurs in the USA, who go there to take advantage of the unique opportunities to invest in New York City’s lucrative culture, food, entertainment, and arts scene.

It has the second-highest number of billionaire residents in America, with a whopping 114 billionaires.

That being said, wealth disparities are large in New York. 8% of the population lives in extreme poverty, 12% of jobs are low-wage, and at 2.43%, the home foreclosure rate is a little higher than some of the other rich states in USA.

Hawaii, known for its breathtaking beaches and rich island culture, is the sixth state on the list of the top 10 richest states in USA. Yes, Hawaii has some of the best vacation spots in the United States.

Hawaii’s unparalleled natural beauty and impeccable tourist infrastructure have earned it a spot on every avid traveler’s bucket list.

The islands have emerged as a top high-end real estate destination, with some of the world’s wealthiest people scrambling for private beach properties.

The average annual income in Hawaii is $103,780. The economy in the exotic state is dominated by the tourism industry, which contributes to an overall state GDP of over $89,866 million.

Although Hawaii is known to have some economic disparity, only 6% of the population lives in extreme poverty.

The fifth state in the ranking of the top 10 richest states in USA in 2022 is the sunshine state, California State. Like Washington and Virginia, California has an extremely affluent tech industry.

California is essentially the land of the billionaires, with over 189 billionaire residents and counting.

The average annual income in California is $106,916, with only 6% of the population living in extreme poverty.

The overall state GDP is $3,120,386 million, the highest in the country and exceeding that of the entire United Kingdom.

In addition to the lucrative real estate, tech, government, and insurance industries, California’s GDP is also supported by a thriving agricultural sector, including fruit, vegetables, dairy, and wine production.

Maryland is the fourth richest state in the USA in 2022. Historically, Maryland, like Virginia, has maintained a spot as one of the richest states in USA due to its close distance to Washington, D.C, and an abundance of highly affluent governmental agencies like the National Institute of Health and corporate headquarters for major companies like Marriott.

While the overall state GDP is only $427,616 million, the average annual income is comfortably in the six-figure range at $111,417 per year, and less than 6% of the population lives in extreme poverty.

While Massachusetts is not rich in natural resources, but it has one of the highest concentrations of educated people in the country.

The small state has over 90 universities including the prestigious and famous Harvard University, and about 45% of adults over the age of 25 have at least a four year college degree.

The extraordinary smarts of the Massachusetts population translates into riches. The state has an average annual income of $111,498. This makes it the third richest state in the USA.

The second richest state in USA is Connecticut State. The actual state GDP is only $283,601 million.

What makes Connecticut so rich is not its productive power, it’s the remarkable extent at which it has lured in America’s wealthiest families.

Due to its stunning natural beauty, and relatively lower income tax compared to its neighbors, wealthy people from New York city and other nearby locations often establish their residency in Connecticut.

Many Connecticut cities are enclaves for some of the USA’s wealthiest. The ‘Gold Coast’, comprising the cities of Bridgeport, Stamford and Norwalk, is consistently ranked as one of the richest areas in the entire country.

New Jersey is currently the richest state in USA. This may come as a surprise to some, as New Jersey isn’t commonly the first state that comes to mind when thinking of the wealthiest states in the USA.

However, like Connecticut, New Jersey’s wealth is greatly influenced by its close proximity to the massive metropolitan cities of New York city and Philadelphia.

Rich tycoons from these cities prefer the calm and spaciousness that New Jersey has to offer compared to the exhausting bustle of the city.

Over 9% of all New Jersey households are millionaire households, and New Jersey counties like Monmouth County harbor some of America’s richest cities.

The state GDP is $625,659 million with industries such as pharmaceuticals, financial services, manufacturing, transportation, IT, and logistics driving economic growth.

The average annual income in New Jersey is the highest in the country at $114,691. That being said, many of New Jersey’s most affluent individuals work outside the state, and more than 14% of in-state jobs qualify as low wage.

This concludes the list of the top 10 richest states in USA.

As demonstrated, several complex factors can influence the affluence of a state. Some states earned their wealth through organic economic growth, others by attracting the richest people in the country to reside within their borders.

It is always best to take a comprehensive approach when evaluating wealth.

What did you think? Let’s have your opinion in the comment section.