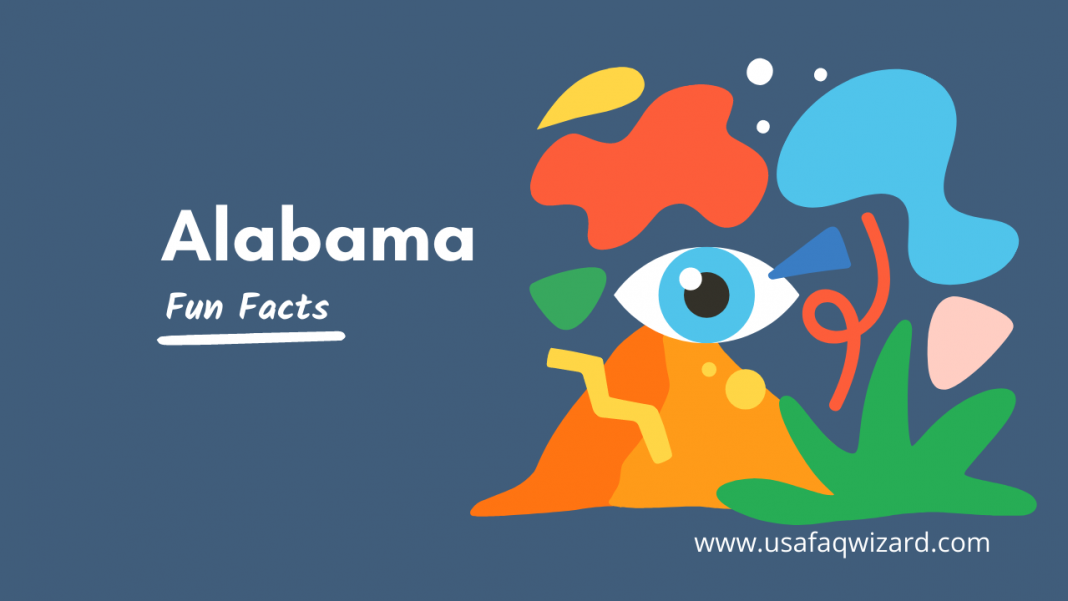 We bring to you 50 interesting fun facts about Alabama in this quick post.

Alabama state is a United States of America constituent state that joined the union as the 22nd state in 1819.

On the map, Alabama is roughly rectangular and elongated in a north-south orientation. It is bordered on the north by Tennessee, on the east by Georgia, and on the west by Mississippi.

Although Alabama’s average elevation is around 500 feet (150 meters) above sea level, there is a gradation from the high point of 2,407 feet (734 meters) on Cheaha Mountain in the northeast to the flat, low southern Gulf Coast counties.

Several relief zones can be distinguished within this gradation. In this post, we share with you 50 amazing fun facts about Alabama.

1. Alabama introduced the Mardi Gras to the western world. The celebration is held on Shrove Tuesday, the day before Lent begins.

2. Alabama workers built the first rocket to put humans on the moon.

3. The world’s first Electric Trolley System was introduced in Montgomery in 1886.

4. Alabama is the only state with all major natural resources needed to make iron and steel. It is also the largest supplier of cast-iron and steel pipe products. – Fun facts about Alabama

5. Montgomery is the capital and the birthplace of the Confederate States of America.

6. The Confederate flag was designed and first flown in Alabama in 1861.

8. The town of Enterprise houses the Boll Weevil Monument to acknowledge the role this destructive insect played in encouraging farmers to grow crops other than cotton.

11. “Alabama” is the official state song.

13. A skeleton of a pre-historic man was found in Russell Cave.

15. Huntsville is known as the rocket capital of the World.

16. The Alabama Department of Archives is the oldest state-funded archival agency in the nation.

17. The musical singing group Alabama has a Fan Club and Museum in Fort Payne.

18. In 1902 Dr. Luther Leonidas Hill performed the first open-heart surgery in the Western Hemisphere by suturing a stab wound in a young boy’s heart. The surgery occurred in Montgomery.

21. Between 1817 and 1819 Old Saint Stephens was the first territorial capital of Alabama.

22. In 1956 the Army Ballistic Missile Agency was established at Huntsville’s Redstone Arsenal.

24. In 1995 Heather Whitestone serves as first Miss America chosen with a disability.

28. Hitler’s typewriter survived from his mountain retreat and is exhibited at the Hall of History in Bessemer.

30. Winston County is often called the Free State of Winston. It gained the name during the Civil War.

31. Mobile is named after the Mauvilla Indians. – Fun facts about Alabama

33. The Alabama State Flag was authorized by the Alabama legislature on February 16, 1895.

34. Hematite is Alabama’s official state mineral and is known as oxide of iron (Fe2O3).

35. The Monarch butterfly (Danaus pleipuss) is the state’s official insect.

36. The star blue quartz is the state’s official gemstone.

37. The Florence Renaissance Faire is the Alabama’s official fair.

38. The pecan is Alabama’s official nut.

39. People from Alabama are called Alabamians. – Fun facts about Alabama

43. Singer and entertainer Nathaniel Adams (Nat King) Cole was known as the man with the velvet voice. He was born in Montgomery in 1919 and died in 1965.

45. The Birmingham Airport opened in 1931. At the time of the opening, a Birmingham to Los Angeles flight took 19 hours.

48. Washington County is the oldest county in Alabama.

49. General Andrew Jackson defeated the Creek Indians in 1814. Following the event, the Native Americans ceded nearly half the present state land to the United States.

50. At the Battle of Mobile Bay Admiral David Farragut issued his famous command, “Damn the torpedoes, full speed ahead.” The event occurred on August 5, 1864.

Summary of Fun Facts About Alabama

Thanks for checking out this quick collection of Alabama facts. Isn’t it amazing to know that Alabama workers build the very first rocket to put humans on the moon?

Tell us, which of these facts about Alabama interests you the most? Let’s have your comments in the box provided below.