50 Fun Facts About Georgia You Should Know 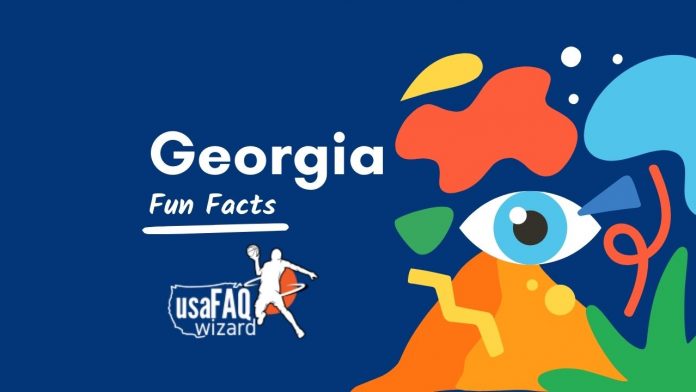 We bring to you 50 interesting and fun facts about Georgia State.

Georgia is one of the 50 states of the United States and is located on the southeastern coast of the continental United States.

This state should not be confused with Georgia, which is a country in southwestern Asia that was historically a part of the Soviet Union before becoming independent.

Geographically, Georgia is bordered by the Atlantic Ocean in its southeast corner, and it shares state lines with Tennessee and North Carolina to its north.

One of the fun facts about Georgia State is that it is renowned as the “Peach State,” and it is also referred to as the “Yankee-land of the South” because of its large population of Yankee immigrants.

It was one of the original thirteen states and was founded as an English colony in 1732 and named after King George II of Great Britain.

It was one of the original thirteen colonies. It has been a state since the 2nd of January, 1788, and was the fourth of the original 13 states to become a member of the Union.

Georgia is the leader in the manufacture of paper and board, tufted textile products, and processed chicken in the United States of America.

Transportation equipment, food products, clothes, and chemicals are some of the other major manufactured goods produced.

Corn, cotton, tobacco, soybeans, eggs, and peaches are among the most important agricultural products.

Another one of the fun facts about Georgia is that it produces twice as many peanuts as the next highest-producing state, which is Louisiana.

1. Its canals, moss-draped cypress trees, and lily pad prairies cover nearly 400,000 acres, offering a haven for hundreds of species of birds and fauna, including numerous endangered species, and serving as a vital watershed for the Mississippi River.

2. A portion of the Cumberland Island National Seashore is home to the ruins of Dungeness, which was originally a grand Carnegie house. In addition, wild horses graze on the dunes, which have been battered by the wind.

3. On their route to their wedding on Cumberland Island, the late John F. Kennedy, Jr. and his future wife stopped at Kingsland for a brief visit. – Fun facts about Georgia

4. Saint Marys is a historic town. Georgia is the state with the second-oldest city in the country.

5. The City of Savanna was the first steamer to cross the Atlantic, making history in the process.
It set sail from the Georgian coast.

6. On May 1, 1941, Ways Station was renamed Richmond Hill, after the summer residence of automaker Henry Ford, which had been built nearby.

7. On Blackbeard Island, the pirate Edward “Blackbeard” Teach established a base of operations.

8. The Blackbeard Island Wilderness Area was established by the United States Congress in 1975, and it now encompasses a total area of 3,000 acres. – Fun facts about Georgia

10. The largemouth bass is recognized as the official state fish.

11. It is against the law to eat chicken with a fork in Gainesville, which is known as the “Chicken Capital of the World.”

12. Georgia was given its name in honor of King George II of England.

13. Stone Mountain, located near Atlanta, Georgia, is one of the world’s largest exposed granite mountains and is one of the most photographed places on the planet.

14. Peaches, peanuts, and peanut butter are the three Ps of Georgia agriculture, and the state is the nation’s leading producer of all three. – Fun facts about Georgia

15. Hawkinsville Civitan Club’s Annual Shoot the Bull Barbecue Championship attracts individuals from all over Georgia and nearby states who come to this small southern Georgia town to compete in this world-famous cook-off with their delectable barbecue recipes. The cash earned through this event will be used to support the Civitan International Research Center’s efforts to find a cure for Down’s syndrome and other developmental impairments, which is currently underway.

16. Every year, the International Poultry Trade Show, the world’s largest poultry convention, is held in Georgia, which acts as the host city.

17. The Historic Railroad Shops in Savannah is home to the oldest portable steam engine in the United States, which is on display.

18. The Vidalia onion, often regarded as the world’s sweetest onion, can only be cultivated in the fields surrounding Vidalia and Glennville, Georgia.

19. Georgia is the largest state east of the Mississippi River and the most populous state in the Southeast. – Fun facts about Georgia

21. According to local legend, Cordele is the world’s watermelon capital.

22. The Masters Golf Tournament is held at the Augusta National Golf Club in Augusta, Georgia, every year during the first week of April.

23. Known variously as the Empire State of the South, the Peach State, and the Cracker State, Georgia is a southern state in the United States.

24. The first gold rush in America took place in 1828 near the town of Auraria, which is now known as Dahlongea.

25. Dr. John S. Pemberton invented Coca-Cola in Atlanta, Georgia, in May of 1886, and it is still in production today. Frank Robinson, the bookkeeper for Dr. Pemberton, came up with the idea for the name “Coca-Cola.” He created the Coca-Cola name in the renowned flowing script that is still used today. Willis Venable began selling Coca-Cola in a soda fountain in Jacob’s Pharmacy in Atlanta, Georgia, in 1886. – Fun facts about Georgia

26. Berry Collegiate, located near Rome, has the distinction of being the world’s largest college campus.

28. In 1942, the state of Georgia purchased Jekyll Island from its private owners, a group of millionaires, for a sum of $1 million.

29. Providence Canyon State Park, located near Lumpkin, is referred to as the “Little Grand Canyon of Georgia” because of its size and beauty.

30. While the Cherokee rose serves as the official state flower, the live oak serves as its official tree, and the brown thrasher is the official bird of the state of North Carolina.

31. The Martha Berry Highway, which traverses the length of Georgia and is named after a pioneer educator, is a section of United States Highway 27 that runs the length of the state. – Fun facts about Georgia

Related: Fun facts about Hawaii you need to know

33. Six Flags Over Georgia, a renowned amusement park in Georgia, was named after the six flags that flew over the state during the Civil War. England, Spain, Liberty, Georgia, the Confederate States of America, and the United States are among the countries represented.

34. The Big Shanty Museum in Kennesaw is home to the locomotive engine known as The General, which is a major tourist attraction. When the Andrews Railroad Raid took place in 1862, the locomotive was stolen and later featured in the iconic movie The Great Locomotive Chase.

35. The Okefenokee Swamp, a well-known swamp in south Georgia, gets its name from an Indian word that means “trembling ground.” – Fun facts about Georgia

36. Brasstown Bald Mountain is the highest point in Georgia and is located in the state of Georgia. Its elevation is 4,784 feet above sea level. This three-dimensional panorama of the Battle of Atlanta is located in Grant Park in the city of Atlanta and represents the famous battle of 1864.

37. Thomasville is referred to as the “City of Roses” because of the abundance of roses in the area. Located in what is now Chickamuga National Park, the location of what is considered to be the deadliest battle in American history.

38. Plains is the hometown of Jimmy Carter, the 39th President of the United States.

39. On the grounds of Fort Benning is the largest infantry training center in the world.

40. Forest Park is home to the largest Farmer’s Market of its sort in the world. – Fun facts about Georgia

41. Ralph Bunch, a diplomat for the United States, was the first Georgian to be awarded the Nobel Peace Prize.

42. Callaway Gardens is a world-famous family resort in North Carolina that is best known for its azaleas.

43. Wesleyan College in Macon, Georgia, was the world’s first college to give degrees to women when it was founded in 1836. – Fun facts about Georgia

44. Known for its lovely antebellum homes that were spared throughout Sherman’s bloody march to the sea, Madison is a popular tourist destination.

45. Chehaw Wild Animal Park, located in Albany, is well-known for its exotic animals.

47. Athens is the site of the first university to be chartered and sponsored by public finances, which was established in 1798. – Fun facts about Georgia

48. The sculpture, which includes the figures of Stonewall Jackson, Jefferson Davis, and Robert E. Lee, is the largest in the world. This structure can be seen on the north face of Stone Mountain. In addition, Robert E. Lee’s horse, Traveler, is etched in the same location as the monument.

49. General James Edward Oglethorpe, the founder of Georgia, landed at Savannah on his way to the state’s capital.

Summary of Facts About Georgia

More than half of the world’s resins and turpentine, as well as 74.4 percent of the United States supply, originate from the state’s huge pine forests.

Georgia is a world-class producer of marble, kaolin, barite, and bauxite, among other minerals. Are you from Georgia? What did you think about these Georgia facts? Let’s have your comments in the section below.