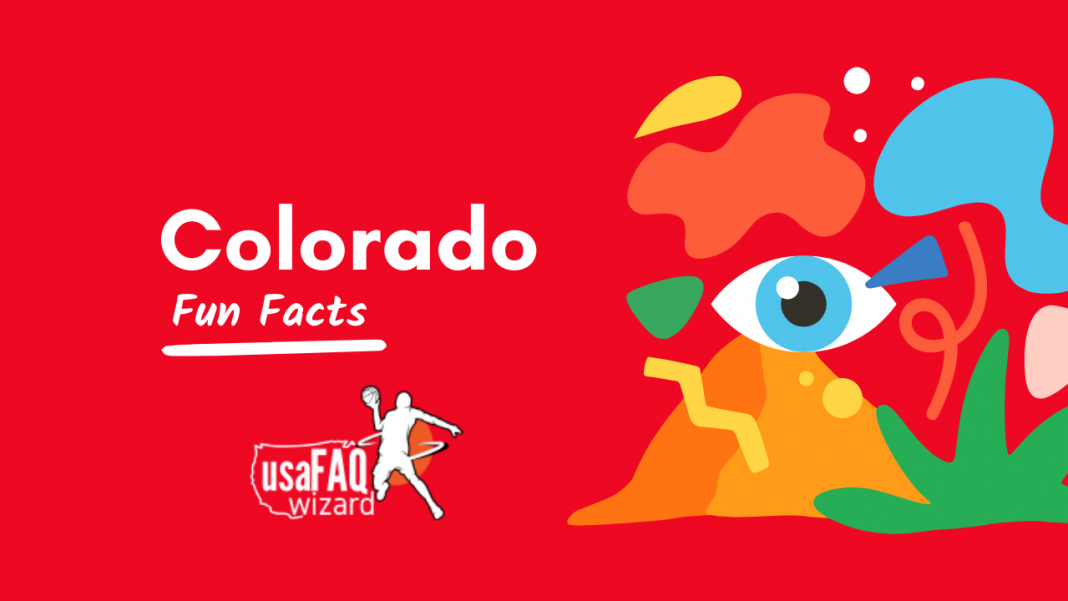 We bring to you 50 interesting fun facts about Colorado State in this quick post.

As you may know, Colorado State is the eighth-largest and 21st most populous state in the United States. Colorado’s population was counted as 5,773,714 people in the 2020 United States Census, up 14.80 percent from the 2010 census.

Colorado is recognized for its beautiful scenery, animals, and a wide range of activities, including hiking, mountain biking, horseback riding, skiing, canoeing, and simply relaxing in nature.

While sharing with you more interesting fun facts about Colorado, you should know that the territory was first explored by Spanish explorers in the 1500s, and Juan de Ulibarri claimed it for Spain in 1706.

The United States acquired eastern Colorado in 1803, the middle portion in 1845 with the admission of Texas as a state, and the western portion in 1848 as a result of the Mexican War.

In 1806 U.S. Army officer Zebulon M. Pike discovered Pikes Peak, the most famous of these mountains.

Colorado’s economy, which was once dominated by mining and agriculture, is now dominated by service industries, such as medical providers and other commercial and professional services.

Manufacturing is also a big part of Colorado’s economy. Food items, printing and publishing, machinery, and electrical instruments are the main industries.

1. “Beulah red” is the name of the red marble that gives the Colorado State Capitol its distinctive splendor. Cutting, polishing, and installing the marble in the Capitol took six years, from 1894 to 1900. All of the “Beulah red” marble in the world went into the Capitol. It cannot be replaced, at any price.

2. Colorado is the only state in history, to turn down the Olympics. In 1976 the Winter Olympics were planned to be held in Denver. 62% of all state Voters choose at almost the last minute not to host the Olympics, because of the cost, pollution, and population boom it would have on the State Of Colorado, and the City of Denver.

4. The world’s largest flat-top mountain is in Grand Mesa.

5. In Fruita, the town folk celebrate ‘Mike the Headless Chicken Day. Seems that a farmer named L.A. Olsen cut off Mike’s head on September 10, 1945, in anticipation of a chicken dinner – and Mike lived for another 4 years without a head.

6. The LoDo region of Denver stands for Lower Downtown.

7. Denver, lays claim to the invention of the cheeseburger. The trademark for the name Cheeseburger was awarded in 1935 to Louis Ballast. – Fun facts about Colorado

8. The highest paved road in North America is the Road to Mt. Evans off of I-70 from Idaho Springs. The Road climbs up to 14,258 Ft. above sea level.

10. The Durango & Silverton Narrow Gauge Railroad continues to provide year-round train service operating a historical train with rolling stock indigenous to the line. The line was constructed primarily to haul mine ores, both gold, and silver, from the San Juan Mountains.

11. The United States federal government owns more than 1/3 of the land in Colorado. – Fun facts about Colorado

14. Colfax Avenue in Denver is the longest continuous street in America.

15. The 13th step of the state capital building in Denver is exactly 1 mile high above sea level.

16. The Dwight Eisenhower Memorial Tunnel between Clear Creek & Summit counties is the highest auto tunnel in the world. Bored at an elevation of 11,000 feet under the Continental Divide it is 8,960 feet long and the average daily traffic exceeds 26,000 vehicles. – Fun facts about Colorado

17. Leadville is the highest incorporated city in the United States at 10,430 feet elevation. Because there were lots of “silver” named towns at the time, the founding fathers suggested Leadville.

18. Katherine Lee Bates wrote ï¿?merica the Beautifulï¿?after being inspired by the view from Pikes Peak.

19. Hundreds of thousands of valentines are re-mailed each year from Loveland.

20. Fountain, has the distinction of being the United States’ millennium city because it best symbolizes the overall composition of America. The fountain is the most accurate representation of the American “melting pot.” The fountain was chosen after a Queens College sociologist crunched Census Bureau statistics in an effort to find the one city in the country that best represented the population make-up of the United States. – Fun facts about Colorado

21. Pueblo is the only city in America with four living recipients of the Medal of Honor.

22. The tallest building in Colorado is the Republic Plaza at 57 stories high, in Denver.

24. Denver has the largest city park system in the nation with 205 parks in City limits and 20,000 Acres of parks in the nearby mountains.

25. Dove Creek is the “Pinto Bean” capital of the world.

26. The tallest sand dune in America is in Great Sand Dunes National Monument outside of Alamosa. This bizarre 46,000-acre landscape of 700-foot sand peaks was the creation of ocean waters and wind more than one million years ago.

28. Lieutenant Zebulon Montgomery Pike explored the southwest portion of the Louisiana Territory in 1806 and though he never climbed the peak that bears his name, he did publish a report that attracted a lot of interest to the area.

29. The slogan of “Pikes Peak or Bust,” painted across many of the prairie schooners, was born at a time as fortune hunters headed west. Although only a handful of those who flocked to the region ever found gold.

32. The Colorado Rockies are part of the North American Cordillera, which stretches 3,000 miles from Alaska, through western Canada and the United States, into northern Mexico. The centerpieces of this dramatic uplift are the peaks over 14,000 feet, or “Fourteeners”, as they are affectionately referred to by climbers. There are 52 Fourteeners in Colorado.

33. Rocky Ford has been dubbed the “melon capital of the world.”

34. The Yampa River below the northwest town of Craig holds northern pike in the 20-pound range, while the Roaring Fork and Frying Pan rivers are prime spots for trout fishing.

35. Colorado has the highest mean altitude of all the states.

36. Mesa Verde features an elaborate four-story city carved in the cliffs by the Ancestral Pueblo people between 600 and 1300 A.D. The mystery surrounding this ancient cultural landmark is the sudden disappearance of the thousands of inhabitants who created the more than 4,000 identified structures.

37. Colorado has more microbreweries per capita than any other state. – Fun facts about Colorado

38. The Kit Carson County Carousel in Burlington dates back to 1905, making it the oldest wooden merry-go-round in the United States. It is the only wooden carousel in America still with its original paint.

39. The Durango and Silverton Narrow Gauge Railroad has been in continuous operation since 1881 and has appeared in more than a dozen movies including How the West Was Won (1963) and Butch Cassidy and the Sundance Kid (1969).

40. The highest suspension bridge in the world is over the Royal Gorge near Canon City. The Royal Gorge Bridge spans the Arkansas River at a height of 1,053 feet.

41. The world’s largest natural hot springs pool is located in Glenwood Springs. The two-block long pool is across the street from the historic Hotel Colorado, a favorite stop of former president Teddy Roosevelt. – Fun facts about Colorado

42. Built-in 1867 by Seth Lake, the Astor House in Golden was the first stone hotel built west of the Mississippi River.

43. Colorado’s southwest corner borders Arizona, New Mexico, and Utah the only place in America where the corners of four states meet.

44. There are nearly 20 rivers whose headwaters begin in Colorado, with the Continental Divide directing each river’s course.

45. The Colorado Rockies play at the 50,000 seat Coors Field, located in downtown Denver.

46. In 1859, John Gregory discovered “The Gregory Lode” in a gulch near Central City. Within two weeks, the gold rush was on and within two months the population grew to 10,000 people in search of their fortune. It came to be known as “The Richest Square Mile on Earth”.

47. Colorado’s first and oldest military post, Fort Garland was established in 1858 and commanded by the legendary frontiersman Kit Carson. – Fun facts about Colorado

48. Abundant nesting and migrating birds and other native animals provide a “world-class” watchable wildlife experience. Bald eagles and other raptors, sandhill cranes, shorebirds, and water birds can be seen seasonally at San Luis Lakes near Alamosa.

49. Florissant Fossil Beds National Monument near Cripple Creek is a lesson in history set in the one-time shadow of the Guffey Volcano. The volcano erupted millions of years ago, creating fossils and leaving the valley filled with petrified trees.

50. John Henry “Doc” Holliday’s brief and tumultuous existence led him to Glenwood Springs where he succumbed to tuberculosis and died at the Hotel Glenwood on November 8, 1887.

Thanks for checking our quick collection of Colorado State facts. Please like, share, and don’t forget to drop your comments.